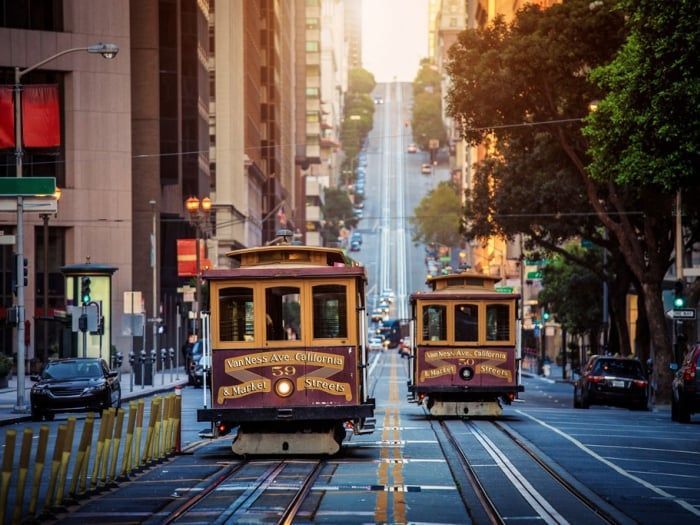 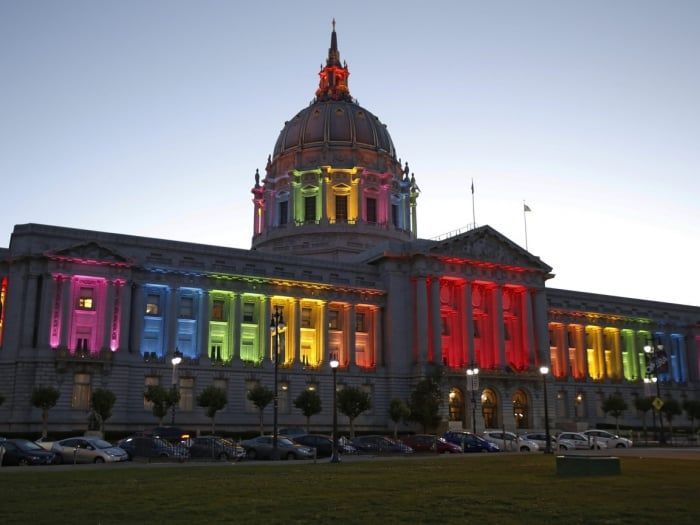 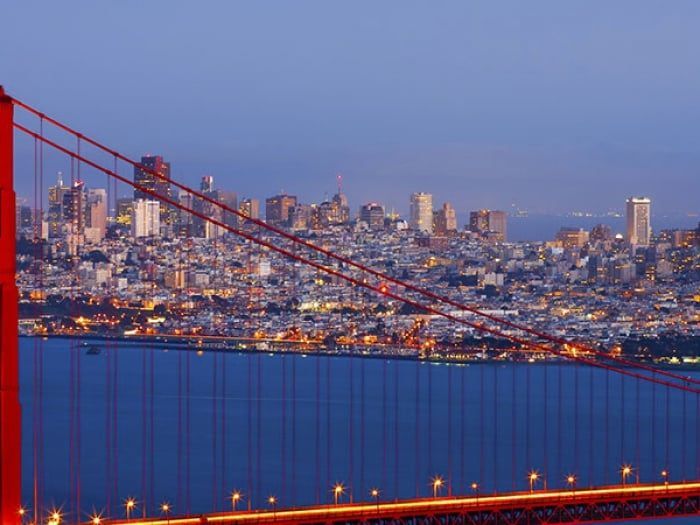 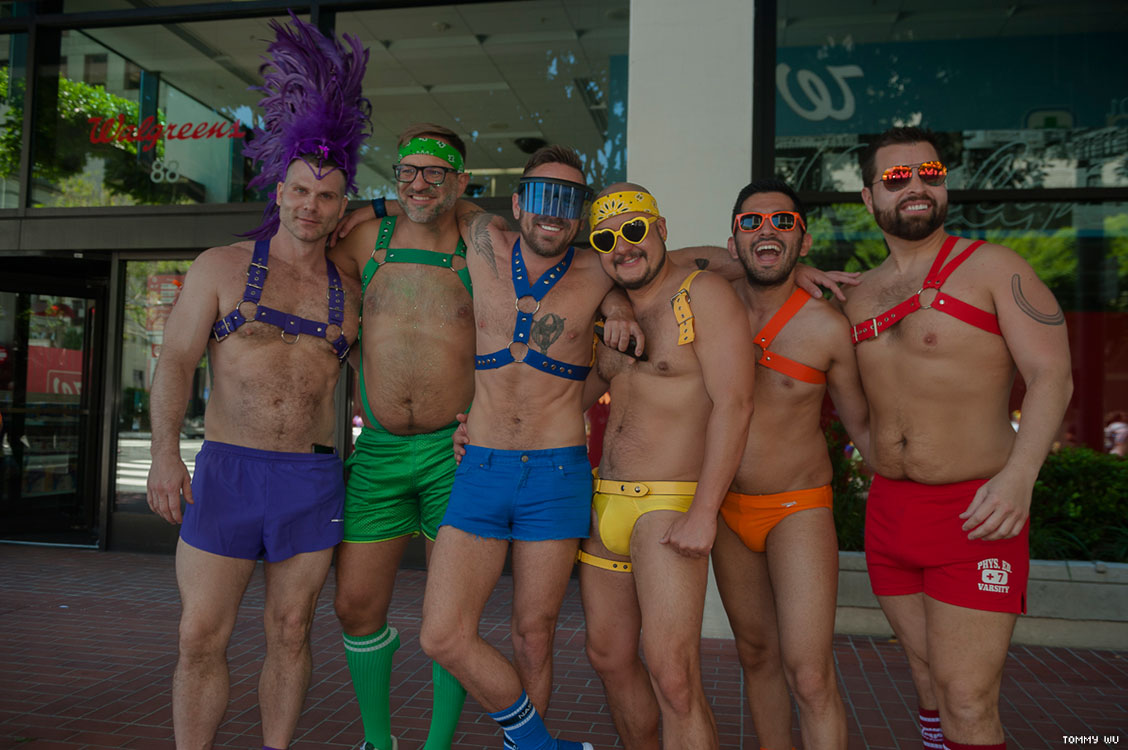 The iconic gay city of hills, cable cars and the famous Castro neighbourhood

During the California Gold Rush of 1849, the city grew rapidly and became the largest city on the west coast of America. Almost three-quarters of the city was destroyed by an earthquake and fire in 1906.

As the city was rebuilt and there was immigration the city developed liberal attitudes, hippie culture, the Peace Movement & Anti War along with a Sexual revolution, Flower Power and the gay rights movement. As a popular tourist destination San Francisco is known for its long cool summers, fog, steep rolling hills, eclectic mix of architecture and landmarks, including the Golden Gate Bridge, cable cars, the former Alcatraz Prison, Fisherman's Wharf, and its Chinatown district. San Francisco.

San Francisco is an iconic city for the LGBT community as a pioneer and battle ground for LGBT rights in the 1960s. It has possibly the highest gay population per capita is the world despite being one of the most expensive cities in the United States. The main gay area is Castro district of the city.

The iconic cable cars dating back to 1873 and still in use today after restoration are the best and a convenient way to get around the city. You can buy a City Pass for multiple days for unlimited rides on cable cars and buses to get around.

San Francisco has a number of LGBT owned boutique guest houses that are not exclusively gay as we as the gay community do not discriminate against the straight community and have straight friends whom like to travel with us stay at the same place. In addition to the LGBT owned places to stay there are a number of gay friendly guest houses and hotels in the city.

To enjoy your visit to San Francisco it is recommends to stay in the Castro area so you are close to the bars, cafes, clubs, restaurants, saunas and shops frequented by the gay community.

San Francisco is considered a gay mecca given the huge gay population and number places to go out. This gay neighbourhood is referred to as the Castro and is an area running from Castro St. & Market St. to 19th St. This area is full of bars, dance clubs, good quality café and restaurants as well as lots of trendy shops.

440 Castro is a leather bar frequented mainly by a crowd in the 30 and 40-somethings enjoying drinks and cruising. They have themed nights during the week.

Badlands is a popular video/music dance bar and normally crowded. It is located in the Castro at good location and therefore popular with tourists who find it easily. It attracts a young crowd and has go go dancers generally on Thursday evenings.

Beaux Bar and Dance Club is a twinks and twink admirers’ place. It has themed party nights a few times a week.

Hi Tops is a gay sports bar in the Castro. They have some fun themed nights related to gym and sportswear if that is your fetish

Lookout Bar is a trendy bar with balcony overlooking Market Street in the Castro.

The Cafe is a club for 20 and 30ish guys to dance in this large venue in the Castro. They have themed nights Wednesday to Fridays.

SF Eagle is a popular leather dive bar frequent by a mixed crowd of muscle guys, daddies, bears, pups, otters and others.

The Stud is a long establish gay bar in SoMa. It has a late license so popular with guys for the last drink before heading home.

The is lots of competition between bars and clubs due to the amount of choice so in particular for the clubs check the local gay magazine of flyers in the bars, cafes, restaurants and trendy shops to know what is happening in the days you are in town

The Castro neighbourhood has a great choice of places to eat out.

Mission District is a part of town for Central American and there are a lot of taquerias serving the local specialties.

Chinatown obviously is the place to go for Chinese food and dim sum.

North Beach areas is San Francisco’s “Little Italy” and the place to go for good Italian food and pizza.

Blow Buddies is a sex club in SoMa. It is generally a member only club but tourists can enter. Do not wear aftershave otherwise they will not let you in. If you are open minded and looking for sexual fun from glory holes to jock straps to golden showers etc then give this a place a try. It will be an experience you can share with you gay friends back home.

Eros is a two-story sauna in the Castro with steam, sauna, showers, lockers, bunk beds and play areas. It gets busy right after guys leave work and after the bars and clubs close.

Powerhouse is a cruise bar in SoMa with a dark room, sex videos, patio attracts a mixed crowed of generally friendly men looking for fun.

There are 3 other popular shopping area with the gay community in addition to all the trendy stores around by the Castro.

Chestnut Street has a selection of high-end boutiques, beauty outlets restaurants and other named brand shops.

Chinatown is popular to buy cheap gifts and souvenirs as well other Chinese imported goods. Union Square is the main shopping area with all the major designer label brands and larger American department stores in the area.

The most famous LGBT event is San Francisco is the gay pride parade which has been running for almost 50 years as one of the first ever. It is the biggest in the United States. The Pride weekend is well attended by locals, American tourists and foreigners in June.

Folsom Street Fair is an annual event held every September and the biggest gay fetish event in the world with over 400,000 fetish enthusiasts. If fetish is your thing it is an amazing event with parties and over 200 exhibitor booths with every type of fetish gear and toys you could imagine.