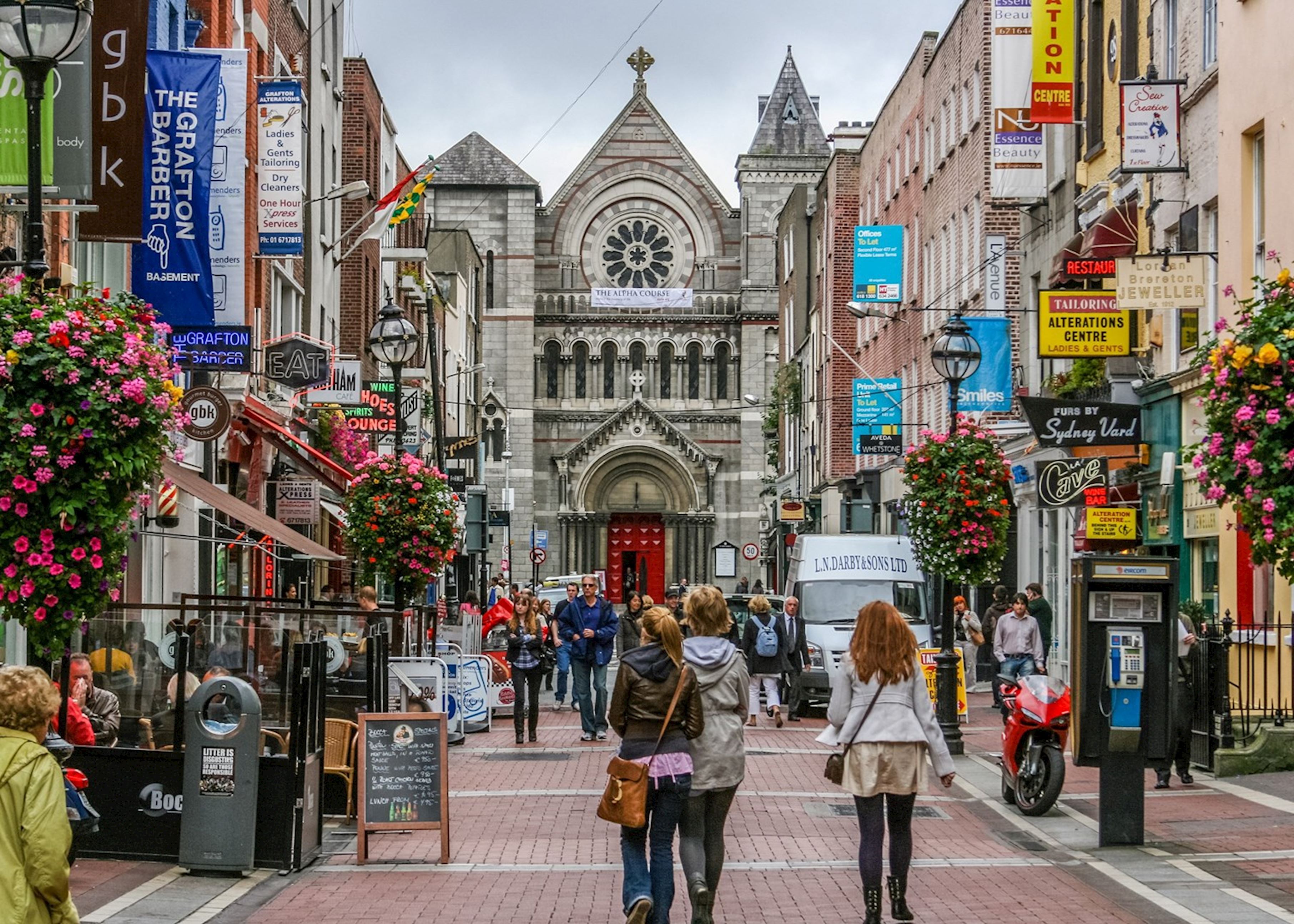 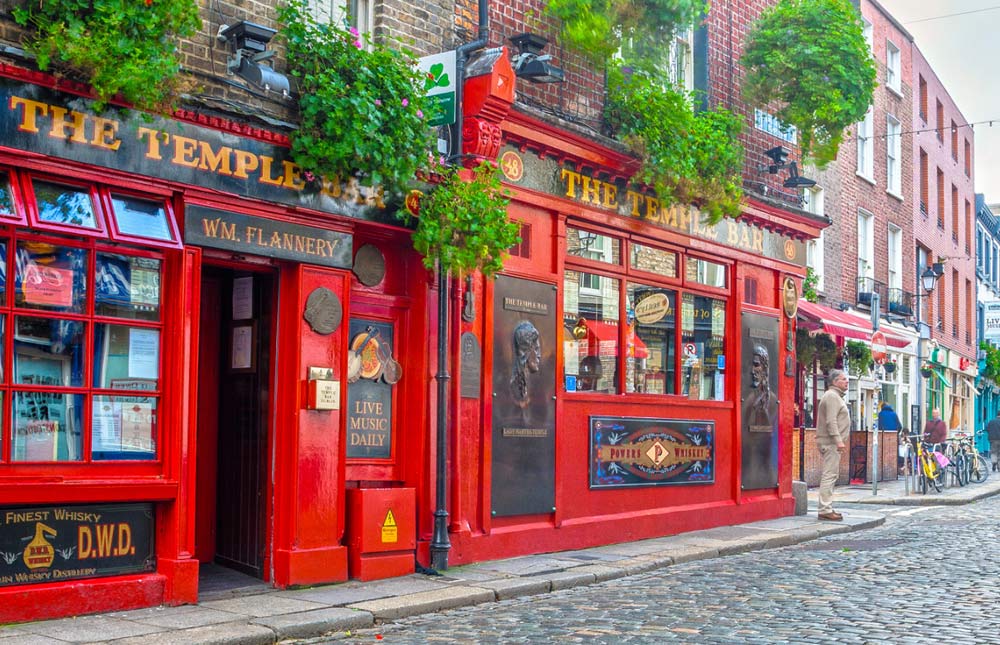 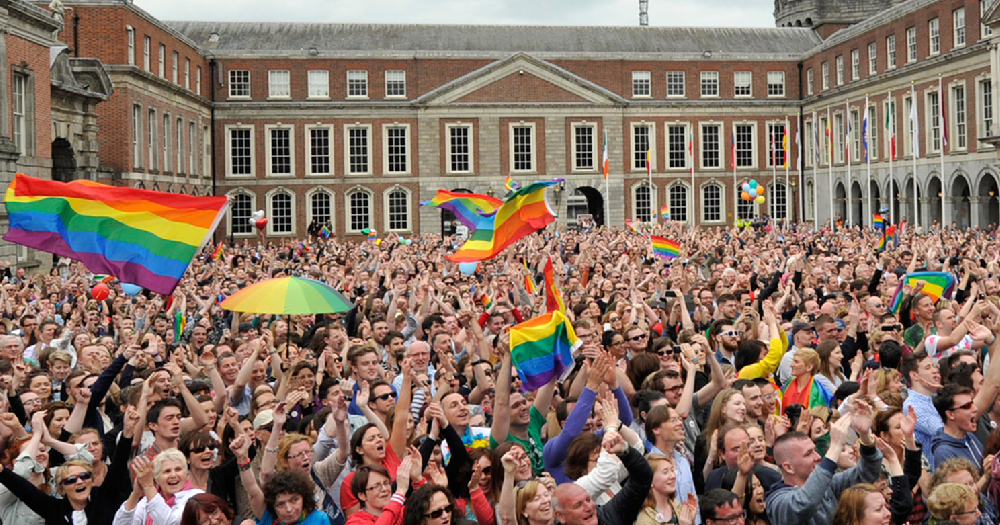 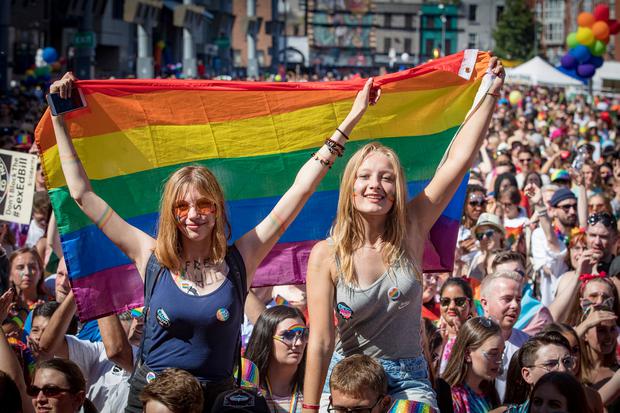 Dublin, capital of the Republic of Ireland with River Liffey running through city centre.

A small European capital, Dublin’s cosmopolitan outlook, embraces diversity and multiculturalism as Irish people are generally relax and open minded despite influence of the catholic church.

Dublin was established as a settlement around 7th century and grew to become Ireland's principal settlement by the 12th century. The city then expanded to become the second largest in the British Empire but following the gaining independence in 1922, Dublin became the capital of Ireland in 1937.

Ireland has seen a dramatic change in LGBTQ attitudes and policies within the space of a generation. For many years, Ireland was a very conservative country with a strong catholic religious influence, but in 2015 it became the first country in the world to legalize gay marriage via a national vote. Citizens can now self-declare their gender, and there are legal protections against discrimination and hate crimes on the basis of sexuality. Ireland in 2017 appointed Leo Varadkar, an openly gay Taoiseach (Prime minister).

There isn’t a specific gay area in centre of Dublin, but it has many LGBTQ centric spaces dotted around the city. On South Great George's Street, you have the legendary LGBTQ bar and club The George, which has open for over 30 years. On the same street, there are cafes and restaurants that had the rainbow flag hung up in their front windows supporting the LGBTQ community and on Capel Street, you have two gay bars facing each other, Pantibar and Pennylane, while across the bridge, you can find gay bar Street 66 on Parliament Street.

Dublin Airport is located north of Dublin city centre, near Swords. You can travel directly from Dublin Airport to central locations in city centre by Dublin Express bus. The bus runs from airport to multiple conveniently located stops in centre of Dublin. Departing from immediately outside the doors of both airport terminals, the service includes free Wi-Fi, USB charging points and an onboard toilet.

Dublin is a fairly compact city, which means walking is easiest way to get around. You can walk from many of the city centre to outlying districts to its centre in around 30 or 40 minutes. Public transport in Dublin is pretty good with large local bus network.

Dublin is divided into two halves by the River Liffey. Each of these parts contains smaller neighborhoods, each of them having its own charm. Dublin is not a big city and if you want to stay as central as possible, choose a hotel that’s close to O’Connell Street, regardless if it’s North or South of the River Liffey. Temple Bar is also very a very central area with lots of night life as well as hotels around Grafton Street is good location.

Dublin is a very safe city, there is so much to do enjoying the Irish hospitality in small bars and restaurants, exploring historic castles or places close to River Liffey.

Ireland is famous for the Guinness drink as there is a seven-floor exhibition space at the St James’s Gate Brewery in central Dublin, where Guinness was first brewed in 1759. You can discover the process for brewing this iconic, black and creamy stout and then, finish with a free pint of Guinness at the seventh-floor Gravity Bar with spectacular views over Dublin!

The Book of Kells at Dublin Castle is one of the most important highlights of Irish heritage. It is known for its world-renowned artistry, dating back to the 800 AD. You can explore the castle and medieval streets located within the original city walls of Dublin.

Oscar Wilde is one of the most famous Dublin residents. His belief in his sexuality has made him a LGBTQ icon and his writings are considered part of queer culture. Searching on the internet you can locate to visit his birthplace, college, and social haunts or join an Oscar Wilde guided walking tour.

If you are a whiskey drinker you can visit Jameson Distillery Bow St to learn the story of Jameson with tastings and a restaurant. Located on the original site where Jameson Irish Whiskey was distilled until 1971.

While Dublin that is famous for the traditional Irish bars there are the gay bars and clubs catering to a range of music tastes and atmospheres.

The LGBTQ community generally meet together in all these bars which makes for an interesting and inclusive night out. The Temple Bar area is home to most of the extremely popular gay bars.

The George Bar is considered Dublin’s most iconic LGBTQ venue have operated for over 30 years. The George is one of the most popular go-to gay bars in Dublin for fabulous events, guest performances, friendly crowds and sexy go-go boys. Hosting weekly drag shows, bingo, glitter bomb parties and pumping dance floors most nights.

Pantibar is a fun gay bar owned by a drag queen Ms Panti Bliss at the top of Capel Street. The giant rainbow flag and massive outdoor sign make the place easy to find. Cute and friendly bar serve delicious and relatively cheap cocktails. Open daily from 2pm until 11.30pm weekday and 12.30am at weekends.

Pennylane Bar is the quieter sister of Pantibar sitting right across the street. A chic cocktail gay bar with décor featuring red brick wall, marble statues, and plants. The staff at Pennylane are lovely and sure know how to whip up a delicious cocktail. Open daily from 5pm (on weekends from 3pm) until midnight.

Mother is a gay dance party held on Saturday nights at Lost Lane on Grafton Street. Open from 11pm until 3am.

Sweatbox is a gay party that's held every Friday night in the “The Hub” in Temple Bar. It is a gay club house music club event. It’s a night of great music, hot men, and sweaty dancing.

The Boilerhouse is the most popular gay sauna in Dublin with modern facilities, a central location, and a mixed bag crowd. A mixed crowed with a mix of locals, tourist and Irish citizens visiting Dublin. Facilities include the sauna, jacuzzi, coffee bar, play area, steam room, and showers and private cabins for rent.

Grafton Street is the epicenter of Dublin shopping and has everything from high-end boutique shops to regular high street fare.

Dublin Pride, the biggest Gay Pride in Ireland, attracting attendees from all over the world. Held annually in June, the highlight is the street festival in Merrion Square, a vibrant parade, and the club parties